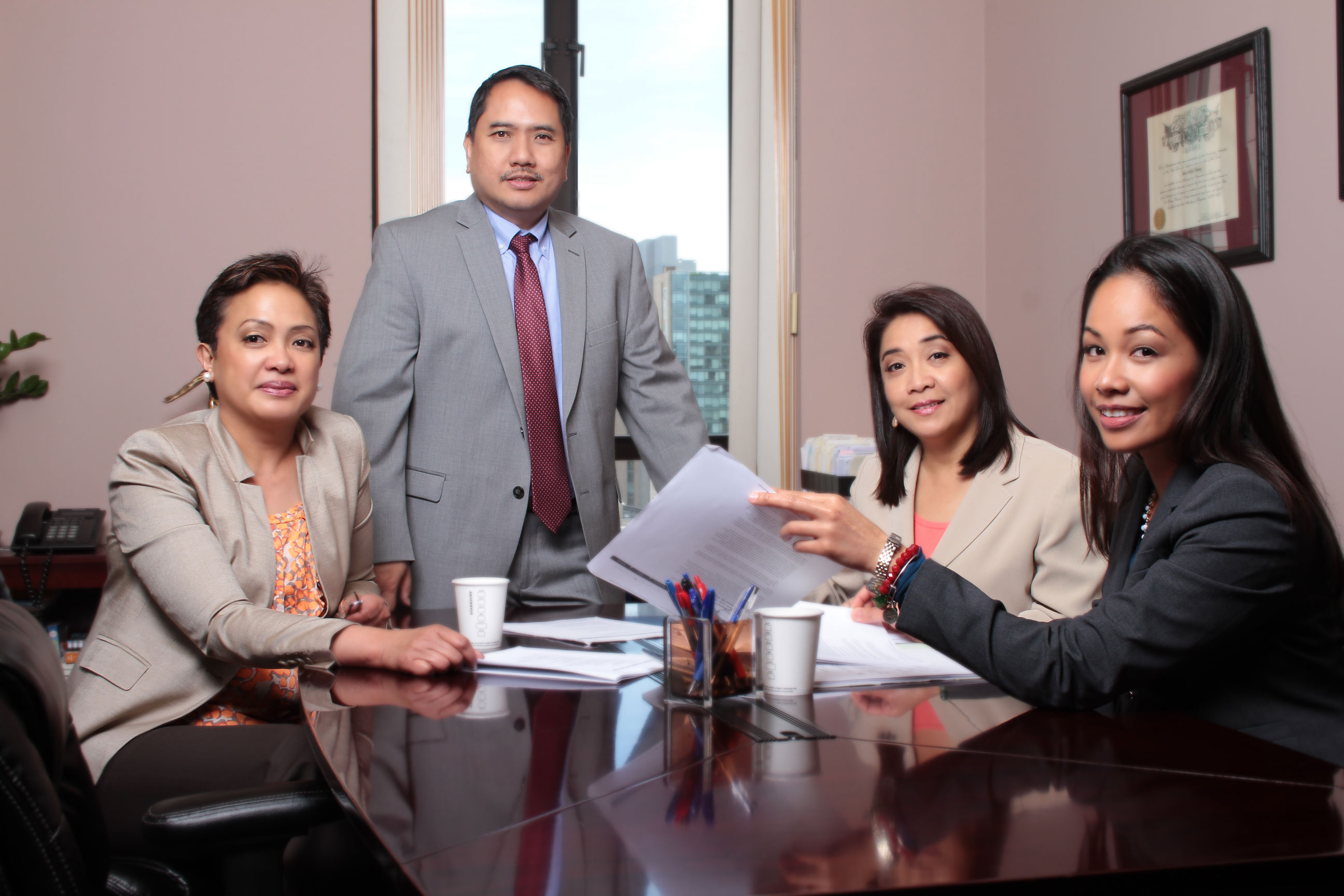 With over 25 years of legal experience, in Philippine Law as well as United States Immigration Laws and California law, we as attorneys have dedicated our lives to the practice of law.  Each case is important to us and we are committed in representing every client to the best zealously and above all things competently.

Foreign nationals coming to the United States can be generally classified into 2 classes: Immigrants (or Legal Permanent Residents) and Non-immigrants.

B Visa – Business or Pleasure

Study in the U.S.

Invest in the U.S.

TN – Canadians and Mexicans are classified as Treaty Nationals Under NAFTA

A – Diplomatic and other government officials, and their families and employees

G – Representatives to international organizations and their families and employees

I – Representatives of foreign media and their families

Spouse, Children and Parents of US Citizens

Spouse and Children of Permanent Residents

Alien of Extraordinary Ability in the Sciences, Arts, Education, Business or Athletics

EB–2 Professionals with Advanced Degrees or Persons with Exceptional Ability

Aliens of Exceptional Ability in the Sciences, Arts or Business

Employees and Former Employees of the U.S. Government Abroad

You can gain U.S. citizenship status through a process called Naturalization. General requirements for naturalization include a 5-year period of continuous residence and physical presence in the U.S., except for spouses of U.S. citizens (3 years) and active members of the U.S. military (1 year); ability to read, write and speak English; a knowledgeable understanding of U.S. history and government; good moral character; attachment to the principles of the U.S. Constitution; and a favorable disposition toward the U.S.

Family law deals with a number of issues related to: parents, spouses, children, domestic partners, unmarried couples, and same-sex partners. We at CHUA TINSAY & VEGA understand that not only are the legal matters involved in family law highly complex, they are also often emotionally charged as the outcome of the cases bear significant impact on the lives of the client, their families, and their children.

Our experienced family law attorneys assist clients throughout California in all types of family court cases, including:

“A bankruptcy discharge releases the debtor from personal liability for certain specified types of debts. In other words, the debtor is no

longer legally required to pay any debts that are discharged. The discharge is a permanent order prohibiting the creditors of the debtor from taking any form of collection action on discharged debts, including legal action and communications with the debtor, such as telephone calls, letters, and personal contacts. Although a debtor is not personally liable for discharged debts, a valid lien (i.e., a charge upon specific property to secure payment of a debt) that has not been avoided (i.e., made unenforceable) in the bankruptcy case will remain after the bankruptcy case. Therefore, a secured creditor may enforce the lien to recover the property secured by the lien.”

PARLADE HILDAWA, PARLADE ECO & PANGA is a premier arbitration/dispute resolution firm in the Philippines. The partners at PHPEP are among the country’s most respected, often invited to share their expertise in both domestic and international conferences organized by the World Trade Organization (WTO), the United Nations Commission on International Trade Law (UNCITRAL), the International Bar Association (IBA), and the Inter-Pacific Bar Association (IPBA).